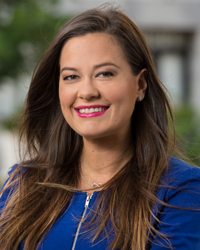 Amanda Brunson joined the Sammis Law Firm in 2017. Her practice is focused exclusively on criminal defense, including all felony and misdemeanor offenses prosecuted in state court.

Before joining the Sammis Law Firm, Amanda Brunson served as an Assistant Public Defender at the Public Defender’s Office for the 13th Judicial Circuit in Hillsborough County.

During her three and a half years as an Assistant Public Defender, she represented clients in more than twenty (25) jury trials and more than forty (40) bench trials.

While in law school, Amanda continued her pursuit of criminal defense work and completed a Florida Bar Fellowship with the Public Defender’s Office in the Major Crimes Bureau. During the fellowship, Amanda focused on crimes of a sexual nature as well as Jimmy Ryce cases, gaining valuable experience for her future criminal defense career.

Upon graduating from law school and passing the bar exam on her first attempt, Amanda returned to her hometown of Tampa, Florida, to begin her career as an Assistant Public Defender at the Public Defender’s Office for the 13th Judicial Circuit.

During her three and a half years as an Assistant Public Defender, she represented clients in more than twenty (25) jury trials and more than forty (40) bench trials.

As an avid runner and fitness fanatic, she is a member of On Track Running Academy (OTRA) and L.O.U.D Runners of Tampa Bay where she runs recreationally with friends. L.O.U.D. (Lifting Others Up Daily) is a running organization that also enjoys giving back to the community. Amanda also paces fellow runners for Beast Pacing.

In addition to her numerous half-marathons, she ran the Marine Corps Marathon in Washington D.C. in 2016 and the Chicago Marathon in 2017. Her next marathons are the New York City Marathon in the Fall of 2018 and the Little Rock Marathon in the Spring of 2019.

Amanda frequently volunteers at organizations in the Tampa Bay area to include Feeding Tampa Bay, The Humane Society, Girls on the Run Tampa Bay, Trinity Café, Paint Your Heart Out Tampa and Metropolitan Ministries.