What happens if the police or federal agents with Homeland Security at the Orlando International Airport (MCO) discover that you are carrying a large sum of cash? If the authorities find the cash in your wallet, carry on bag, or checked luggage, then they might seize it for forfeiture under state or federal law.

Find a list of our recent case results for seizures to forfeit money seized at the airport in Orlando, FL.

To get the money back, contact an experienced civil asset forfeiture attorney at Sammis Law Firm. We can help you filed a verified claim contesting the forfeiture with the agency that seized the property. Your attorney can file the claim for court action IMMEDIATELY after the seizure even if:

The cash might be discovered when the carry-on bag goes through the Transportation Security Administration (TSA) scanner at Orlando International Airport. TSA screeners sometimes give secret tips to law enforcement officers when they discover a traveler is carrying cash.

After alleging a violation of 18 U.S.C. 981, the agent might issue a “custody receipt for seized property and evidence” using DHS Form 6051S that references handbook 5200-09.

In some cases, the agent might even ask you to sign a “Notice of Abandonment of Assent to Forfeiture of Prohibited or Seized Merchandise” citing 19 CFR Part 162 (DHS Form 4607), although it is highly improper for them to do so.

Claims for seizures in Orlando, FL, are often funneled to the Office of Fines, Penalties, and Forfeitures, in Tampa, Florida. An attorney can help you immediately file a claim for court action to get the money back.

Attorney for Bulk Cash Seizure at the Airport in Orlando, FL

If your cash was taken at the Orlando International Airport, then contact an experienced attorney to help you get the cash returned as quickly as possible.

In these cases, we take the following steps:

Our forfeiture attorneys are familiar with the standard operating procedures used by special agents with Homeland Security Investigations (HSI) and other law enforcement officers when conducting investigations for bulk cash smuggling at local airports in Florida.

HSI Special Agents often ask for a signature on Form 4607 for the notice of abandonment and assent to forfeiture of prohibited or seized merchandise, although signing that form does not prevent you from immediately filing a claim.

If your money was seized at an airport in Florida, then you need an aggressive civil asset forfeiture defense attorney to get it back.

What Happens During a Seizure of Cash at the Orlando Airport?

When TSA discovers a large amount of bundled currency in a carry-on bag as it goes through the screening process at the security checkpoint in the Orlando International Airport, that information might be passed on to law enforcement officers with:

The law enforcement officers with OPD, MBI, HSI, CBP, or DEA, sometimes work together to investigate these cases at the airport. The cases often involve a fact pattern in which the agent will allege that the traveler voluntarily decided to talk to the agents and answer questions about the money.

In many of these cases, we can show why the traveler was illegally detained, questioned, interrogated, and searched.

For this reason, it is important that we obtain the surveillance video from the airport to show that the detention was not free and voluntary. The video might also show the officers engaging in an illegal search under the Fourth Amendment without a search warrant or any other legal basis.

In these cases, the authorities often interrogate the traveler about the reasons for carrying the cash. The officers almost never read Miranda warnings before they start asking questions.

The agents will determine whether the subject recently purchased the airline ticket or only purchased a one-way ticket. The agents believe that it is common for drug traffickers and money couriers to purchase tickets with a short amount of time prior to traveling.

The amount of cash seized might be compared to the subject’s earnings on his or her last tax return. Based on these factors, the agents might decide to seize or confiscate the money for administrative forfeiture.

You have a right to file a claim and fight the forfeiture even if the agent got you to sign the DHS Form 4607 entitled “Notice of Abandonment of Assent to Forfeiture of Prohibited or Seized Merchandise.”

Form 4607 references 19 CFR Part 162 and provides that “I hereby abandon all claims to the above-described merchandise, and waive any further rights or proceedings relative to these articles.” The agents know it is improper to ask a traveler to sign this abandonment form, but they do it anyway because it discourages people from hiring an attorney or contesting the seizure.

Located six miles to the southeast of downtown Orlando, the Orlando International Airport (MCO) is the busiest airport in Florida and the 10th busiest airport in the United States. The airport code is MCO which was derived from the airport’s former name, McCoy Air Force Base.

With more than 13,000 acres, MCO is the largest commercial airport by land area in the United States. The greater Orlando area is also served by the Orlando Sanford International Airport (SFB). Our asset forfeiture attorneys also handle seizures of cash at:

To obtain a copy of the surveillance video of the seizure of currency or other valuable property from a passenger, the request must be made in accordance with Section 119.12, Florida Statutes.

The public record request is sent to the Custodian of Records for the Greater Orlando Aviation Authority, Director of Board Services, at One Jeff Fuqua Boulevard in Orlando, FL. For seizures at the Orlando International Airport, the local authorities work with federal agents from Homeland Security Investigations (HSI).

When the Government Files a Complaint for Forfeiture In Rem

If the AUSA files a certified complaint for forfeiture in rem, the complaint is filed in accordance with Supp’l Rule G(2), Supplemental Rules for Admiralty or Maritime Claims and Asset Forfeiture Actions.

The civil action in rem to forfeit to the United States of America, pursuant to 21 U.S.C. § 88l(a)(6) the property seized, including currency seized from a traveler at the airport.

The Defendant Funds is the property seized. In many of these cases, the “Defendant Funds” is the U.S. currency seized from a traveler at the airport.

At the Orlando International Airport (OIA), agents with Homeland Security Investigations (HSI) might take custody of the Defendant Funds, which remain in the custody of the United States.

As set forth in Supp’l Rule G(3)(b)(i), the Clerk of Court must issue a warrant to arrest the Defendant Funds if they are in the government’s possession, custody, or control.

The complaint will show facts and circumstances supporting the forfeiture of the Defendant Funds as provided by an HSI Special Agent. The investigation will often begin with the screeners at the Transportation Safety Administration (TSA) contacting the Orlando Police Department (OPD) when they discover a traveler in possession of a large amount of U.S. currency or other valuable property.

The officers with the Orlando Police Department (OPD) will then respond to the TSA screening area to further investigate. OPD’s interactions with TSA, are often video recorded by officer-worn body cameras, but that video evidence must be requested from each custodian of those records to make sure it is preserved.

The law enforcement officers with the local police station or federal agents might then inform the traveler that the suitcase had been flagged and that the traveler can either catch the flight or talk with investigators about the contents of the suitcase or the money being detained.

The local law enforcement officers or federal agents might then escort the traveler to the Orlando Police Department (OPD) substation at the airport. Although the traveler might be told they are “free to leave,” as a practical matter a traveler cannot leave their possessions or valuable property behind.

In many of these cases, the officers or agents will conduct a recorded interview. After explaining that TSA had found an anomaly in the carry on luggage or checked suitcase during the screening process, the agent will allege that the property found is “contraband.”

The officer might say that a dog alerted to the money in their attempt to connect it with drug money. In fact, law enforcement officers at the Orlando International Airport often use a trained narcotics detection dog to positively alerted to the presence of the odor of drugs on money or luggage.

The K9mdogs are trained to detect the odor of six controlled substances: cannabis, cocaine HCL, cocaine base, heroin, methamphetamine, and MDMA.

Because of the suspicious nature in which the money was found, an agent with Homeland Security Investigations (HSI) might decide to seize it. After the seizure of money from the airport, the seized money is taken to the Loomis Financial Services where it was counted.

As required by Supp’l Rule G(2)(f), the AUSA will allege that the facts set forth in the complaint support a reasonable belief that the government will be able to meet its burden of proof at trial. Specifically, probable cause exists to believe that the Defendant Funds constitute:

In the complaint, the United States of America will requests that:

The final requirements to become an AOO include completing an 5-week orientation program. The AOOs must sign a temporary civilian contract for the period of the 5-week orientation. After completing the orientation, the AOO will revert to a 36-hour a week schedule and will receive their hourly rate based on the yearly salary.

Orlando Airport Cash Seizure for Forfeiture – Read an article dated October 5, 2018, in the Orlando Sentinel about why the federal government wants to keep $129,000 in money suspected of being used for drug trafficking. The money was seized at the Orlando International Airport by a special agent with Homeland Security Investigations (HSI) and the forfeiture then proceeds to U.S. Customs and Border Protection (CBP) before being sent to the United States Attorney’s Office if court action is requested. 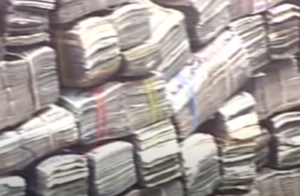