If you were recently served with a petition for an injunction for protection from domestic violence (sometimes called a restraining order), then contact the attorneys at Sammis Law Firm. For more than 10 years, our attorneys have been appearing in court in Tampa and Plant City to represent respondents facing false or exaggerated accusations of domestic violence, repeat violence, dating violence, or stalking.

If the allegations of domestic violence resulted in an arrest for domestic violence battery or related charges, then our experienced criminal defense attorneys can represent you on the felony or misdemeanor charges as well.

Despite the coronavirus (COVID-19) pandemic, our offices are still open for business as usual. If requested, we are scheduling meetings over the phone or through video conferencing platforms like Zoom. If you would like to meet face to face, we are scheduling office visits in our conference room so we can talk in the most confidential setting.

If the allegations are false or exaggerated, then you should respond appropriately so that your rights are protected.

We fight these cases aggressively. We can request a continuance so that we can take the deposition of the petitioner and require the petitioner to provided us with a copy of any documents that support or disprove the allegations. The continuance also gives us a chance to subpoena other witnesses to appear in court or bring documents that disprove the allegations.

We represent high income and high asset clients who might lose their job because of the allegation. For clients with a professional license or who undergo intensive background checks as part of their employment, the stakes are even higher.

Don’t face the judge alone. Contact an attorney at Sammis Law Firm to discuss your rights during a domestic violence injunction hearing.

What is a Domestic Violence Injunction for Protection?

An injunction is a court order that prevents you from doing something or requires you to undo some wrong or injury. Under Section 741.30(1)(e), F.S., a family member or household member can file an injunction for protection against domestic violence. The parties do not need to be married if they have previously lived together as a family or have a child in common. *1

Once the petition is filed, the court decides it on an ex parte basis. The term “ex parte” means that the judge just reads the allegations from one side in the petition before deciding whether the allegations are sufficient for the temporary ex parte injunction to be issued. At that stage of the case, only the petitioner’s side of the story is presented.

If the judge finds sufficient evidence to grant the temporary order on an ex parte basis, then the order also contains the notice of the return hearing which is set in fifteen days.

Being Served with the Petition, Order, and Notice of Hearing

The respondent is then served with the petition, the temporary order for the domestic violence injunction, and the notice of the return hearing. At that point, the respondent should carefully read the order and make sure not to violate any of its terms or conditions.

After reading the order carefully, the respondent should consider hiring an attorney to protect their rights at each stage of the process. An injunction for protection from domestic violence is a serious matter and the consequences can last a lifetime.

Because of COVID-19, you might be required to attend the first return hearing via a video conferencing platform like Zoom. The court might also allow you to attend in person.

If you have good cause, you can ask for a continuance, but be aware that the court will then extend the temporary injunction until the day of the continued return hearing.

The best result is getting the injunction dismissed. When we represent the respondent in one of these cases, one of the following things might happen:

The respondent is NOT permitted to talk to the petitioner about terminating the injunction early, but sometimes an attorney might be able to file such a motion and request that the petitioner appear at the hearing based on some change in circumstances.

Relevant Factors Considered by the Court

When considering the petition for an injunction for protection from domestic violence, the court will consider the following factors:

At the return hearing, the court will hear evidence about these types of factors and look at documents including emails, text messages, or messages left on social media platforms like Facebook. Other evidence might include pictures, photographs, video, or recorded voice mail messages.

Except for the last category of persons who have a child in common, the other types of family or household members must be currently residing together or have resided together in the past in the same single dwelling unit.

This video features Judge Jessica Goodwin Costello, a Circuit Court Judge in the Thirteenth Judicial Circuit who currently presides over domestic violence cases in Hillsborough County. In the video, Judge Costello gives an overview of the Domestic Violence Injunction process in Florida. The video was part of the Florida Institute for Child Welfare (FICW) Interview Series. The video was recorded in Tampa, FL, on October 28, 2019, as part of Domestic Violence Awareness Month.

Petition for Injunction for Protection Against Domestic Violence (11/15) – Visit the website of the Florida Supreme Court to find an online version of the fillable pdf for Approved Family Law Form 12.980(a). 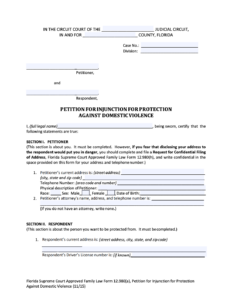