Update: All jury trials were put on hold across the state by the Florida Supreme Court in March of 2020. In September, the 6th Judicial Circuit in Pasco County transitioned to Phase 2 and started jury trials in October.

The courts had to reverse course on resuming in-person court proceedings because the spread of the virus prevented them from doing so safely. On December 9, 2020, jury trials were temporarily suspended in Pasco County.

As a result, no juries were impaneled at the courthouse in New Port Richey or Dade City. No witnesses who expected to testify were required to go to those courthouses.

The suspension of trials in Pasco County is to be effective until at least January 4, 2021, and may continue if circumstances do not improve.

The order imposing the new restrictions does not affect the grand jury in Pasco County, scheduled to convene Thursday, December 10, 2020. The State Attorney is cleared to proceed with grand jury selection and presentations for murder cases.

If you were accused of a misdemeanor or felony in the Sixth Judicial Circuit in Pasco County, FL, then your case will be heard at the courthouse in New Port Richey or Dade City. The Pasco County Detention Facility (also known as the “county jail”) is located between these two cities in Land O’Lakes, FL.

Most criminal cases begin with an investigation by a local law enforcement agency or DUI enforcement officer with:

If you were arrested or given a “notice to appear” in court, then find an experienced criminal defense attorney to represent you in court. It is important to find an attorney as early in the process as possible so that all defenses are available.

From the most serious felony offense to a first-time misdemeanor charge, an experienced criminal defense attorney can help you fight the charges.

Contact an experienced criminal defense attorney at the Sammis Law Firm to discuss the best ways to fight the criminal accusation.  Ouor four attorneys are devoted exclusively to fighting criminal charges in the Sixth Judicial Circuit for Pasco County, FL.

Our main office is located in Tampa, FL. Our second office is conveniently located at 7509 Little Road, New Port Richey, FL, 34654, directly across from the courthouse at the West Pasco Judicial Center.

Contact us to discuss your felony or misdemeanor case during a free and confidential consultation. Find out more about the charges pending against you, ways to avoid the potential penalties, and the best way to fight the charges.

For the prosecution of criminal cases in Pasco County, the county is organized into two distinct areas:

Determining the separation line within the county is difficult because no easily identifiable geographical separation exists. The easiest way to determine if your case is an East or West Pasco case is by identifying the law enforcement agency involved.

If the case is being handled by an East Pasco County law enforcement agency, then it will probably be heard at the Robert D. Sumner Judicial Center in Dade City at 38053 Live Oak Avenue.

If the case is being handled by a West Pasco law enforcement agency, then it will probably be heard in the Pasco Government Center in New Port Richey at 7530 Little Road.

Judges in Pasco County for Criminal and DUI Cases

The most recent judicial assignments for criminal cases in the Circuit Courts in Pasco County, FL, were announced in Administrative Order No. 2018-048 PA-CIR.

Effective January 8, 2019, the East Pasco Judicial Assignments in the Criminal Court Sections in Circuit Court in Dade City include:

The West Pasco Judicial Assignments in the Criminal Court Sections in Circuit Court in New Port Richey include:

The new judicial assignments for Pasco County are listed in Administrative Order No. 2018-049 PA-CTY effective January 8, 2019.

We created this website to provide very general information about very specific criminal offenses under Florida law. This website also explains many of the possible defenses that can be used to fight these types of charges prosecuted in Pasco County, FL.

At Sammis Law Firm, our lawyers represent people charged with both felony and misdemeanor crimes in Pasco County, FL, including:

Criminal cases in Pasco County will be held at either the New Port Richey or Dade City Courthouse.

Dade City is the county seat of Pasco County, located approximately 39 miles north of Tampa. The city was named after U.S. Army Major Francis L. Dade, who, with his entire army, was massacred by Seminole Indians in 1835. The courthouse was named after Robert D. Sumner.
As the 12th largest county in Florida by population, the six municipalities in Pasco County, Dade City, Zephyrhills, San Antonio, Saint Leo, New Port Richey, and Port Richey. The municipalities were established between 1889 and 1925.

DUI Attorneys in Pasco County – If you were arrested for DUI in Pasco County, you only have 10 days to file a request for a formal review hearing with the DMV to protect your driver’s license from being suspended. Visit our DUI information centers for articles about how you can protect yourself after a DUI arrest to avoid a conviction for cases involving a DUI in New Port Richey or a DUI in Dade City, FL.

Pasco County Traffic Infractions – Click here to find information about any traffic ticket, infraction, or citation in Pasco County, FL. Find a traffic fine schedule and traffic citation guide for electing to attend a driver improvement course or contesting the citation during a trial after entering a “not guilty” plea. You can also find the sample forms used in traffic court including the motion to continue civil traffic infraction hearing, election to attend a driver improvement course, or the form for entering a plea of not guilty or no contest. 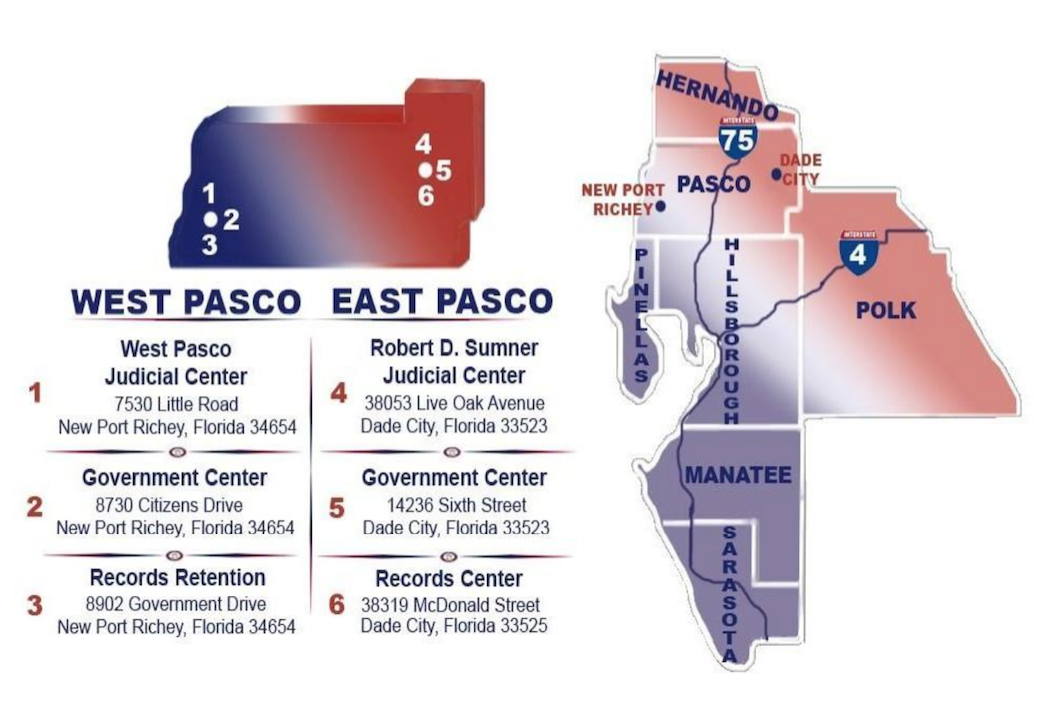 This article was last updated by Jason D. Sammis on Wednesday, December 9, 2020.