The mass shooting at Marjory Stoneman Douglas High School in Parkland, Florida, has reignited the debate over gun ownership rights and the role that law enforcement officers should play trying to prevent future acts of gun violence.

The overall rate of violent crime in Florr ida was 430.3 per 100,000 people. Gun violence is not limited to mass shootings and other types of murder, but includes all forms of aggravated assault and battery.

Florida regulates all aspects of owning and possessing a firearm through the creation of hundreds of criminal offenses. Many of these crimes come with harsh penalties. For serio  us crimes that involve the use of a firearm, Florida law provides for mandatory minimum prison sentences.

Once you become the target of a criminal investigation, you should never make a statement to law enforcement, even if you are sure that your use of the weapon was justified.

Your criminal defense attorney is in the best position to present your side of the story to law enforcement. The attorney you hire should be knowledgeable about all aspects of firearm laws in Florida as well as the tactics used by the local law enforcement officers who are investigating the case.

The criminal defense attorneys at the Sammis Law Firm are focused exclusively on criminal defense. Our offices have been at the same location since 2008, just a few blocks from the courthouse in downtown Tampa.

We also have a second office in New Port Richey in Pasco County across from the West Pasco Judicial Center.

The four criminal defense attorneys in our office are experienced in representing clients accused of firearms, export, or smuggling crimes. We take a scholarly approach to fighting weapon charges by filing all viable motions to suppress evidence illegally obtained or dismiss the charges for insufficient evidence.

We look for problems with the procedures and tactics used by the officers that investigated the crime and made the arrest. If you have been arrested for any firearm or weapon charge in Tampa, Hillsborough County, FL, or the surrounding areas, then call us to discuss your case.

Types of Firearm and Weapon Crimes in Florida

The criminal defense attorneys at Sammis Law Firm in Tampa, FL, represent clients on a variety of weapon charges including:

Criminal Laws for Firearms in Florida

The Second Amendment to the United States Constitution provides for an individual’s right to possess a firearm:

“A well-regulated militia, being necessary to the security of a free State, the right of the People to keep and bear arms, shall not be infringed.”

The right of the people to keep and bear arms in defense of themselves and of the lawful authority of the state shall not be infringed, except that the manner of bearing arms may be regulated by law.

Although these provisions sound simple enough, the Federal Government and the state of Florida have enacted a complex and comprehensive network of statutes and regulations concerning every aspect of gun possession and ownership.

On April 26, 2005, Governor Jeb Bush signed the “Castle Doctrine” Self-Defense Statute (Senate Bill 436) into law. Senate Bill 436 expanded self-defense protections in the State of Florida to provide for a more comprehensive and common sense approach to explaining when deadly weapons, including firearms, can be used to protect yourself or another against a violent attack.

Prior to this legislation, such force was allowed only when the person using deadly force believed that no lesser force, such as retreating from the home or vehicle, would dispel the threat.

The Castle Doctrine in Florida

Under the provisions of the Castle Doctrine, a person may use deadly force against another person who enters a residence or occupied automobile with force and for an unlawful purpose. Deadly force may also be used against a person who is attempting to forcefully and unlawfully remove someone from a vehicle.

The provisions are intended to allow a victim to defend himself or another against an attempted carjacking or home invasion robbery without fear that a law enforcement officer or prosecutor could later second guess whether that decision was “reasonably believed to be necessary.”

Now, even if it was possible to retreat, no such retreat is required from the home or an occupied vehicle. Of course, the law does not protect a person using their vehicle or residence to commit a crime before the threat occurred.

Additionally, the self-defense provisions provide for common sense exceptions, including the protection of persons who have a right to enter the residence or occupied automobile (unless they are subject to a protective order which would prevent such entry), disputes over a child’s custody, and police officers acting in accordance with their official law enforcement duties.

Using Deadly Force in Self Defense in Florida

If the person using deadly force is outside of their residence or occupied automobile, deadly force may only be used when it is “reasonably believed to be necessary.”

Even outside of the home, a person who is lawfully in an area that they are entitled to be in has the right to use the force necessary, including deadly force, if they reasonably believe such force is necessary to prevent great bodily hard or death or to prevent the attacker from committing a forcible felony.

The new provisions go one step further and create a new “presumption” under the law that the person attempting to enter the vehicle or residence was presumed to have the intention of committing a forcible violent felony if they gained entry.

This new “presumption” is a powerful tool at trial that can be argued to the jury by the criminal defense attorney. Furthermore, a new standard jury instruction addressing this presumption can be requested at trial, so that the judge will read to the jury the rule about this presumption that the “alleged victim” was attempting to commit a forcible violent felony at the time of the incident.

The new provisions also prohibit civil liability against any person who acts in compliance with the self-defense provisions. The castle doctrine can also be extended to a person in their place of business acting against an unlawful and forceful attack by another.

The information contained in this website is not intended as legal advice. Instead, it is merely a summary or overview of the law. Each case has particular facts and circumstances that make the case unique.

If you need legal advice about a firearm or gun / weapon criminal case, then contact an experienced criminal defense atorney to discuss your arrest in Hillsborough County, Pinellas County, Pasco County, or Hernando County, FL.

The Florida legislature recently enacted a 10/20/Life provision in an attempt to get tough on crimes involving firearms.

In the State of Florida, weapons charges can carry a minimum mandatory sentence, which means if convicted, you must serve a certain amount of your sentence day for day in Florida State Prison, including:

Keep in mind that these sentences are the minimum mandatory sentence that will be imposed upon conviction, meaning that the court can not impose a lesser sentence.

The court still has the discretion to impose a sentence up to the statutory maximum allowed for the particular offense. The Court can not “withhold adjudication” nor suspend or defer the imposition of the sentence. The 10/20/Life provisions apply to the following offenses:

Illegal Possession of a Firearm in Florida

Federal Law, 18 U.S.C. 922(g) and (n), sets minimum requirements that exclude certain groups of people from legally possessing a firearm. Including any person who meets one of the following criteria:

In addition to the Federal laws that restrict firearm possession, each state has certain more restrictive legislation. Florida law legislation concerning the illegal possession of firearms include the following:

The punishment for illegal possession of a firearm can vary from a misdemeanor to a felony, depending on the circumstances surrounding the possession.

Furthermore, under the Child Access Prevention Law, any gun owner can be prosecuted for not securing a firearm or other weapon in a location that is not readily accessible to children under 16 years of age. If a child under the age of 16 comes into possession of the firearm, the gun owner can be charged with a separate criminal offense for not properly securing the firearm.

It is also a crime under Florida law to provide a juvenile with a firearm, including delivering, giving or transferring the firearm to a person under the age of 18, except under very limited circumstances.

Discharging a Firearm in Public

The elements of Discharging a Firearm in Public or on Residential Property under Section 790.15, Fla. Stat., the prosecutor with the State of Florida must prove the following elements beyond a reasonable doubt:

The most important defenses to the crime of Discharging a Firearm in Public or on Residential Property include:

What happens to my concealed weapon or firearm license after an arrest or formal charges? – Read more about the notice of suspension from the Florida Department of Agriculture and Consumer Services, Division of Licensing, Legal Section concerning Florida Statute Section 790.06(3) including your obligation to return your concealed weapons permit, additional charges for carrying a concealed weapon or firearm with a suspended license, eligibility for licensure, administrative complaint, revocation of the concealed weapons permit, the election of rights form, formal review hearing, informal review hearing, legal support section. 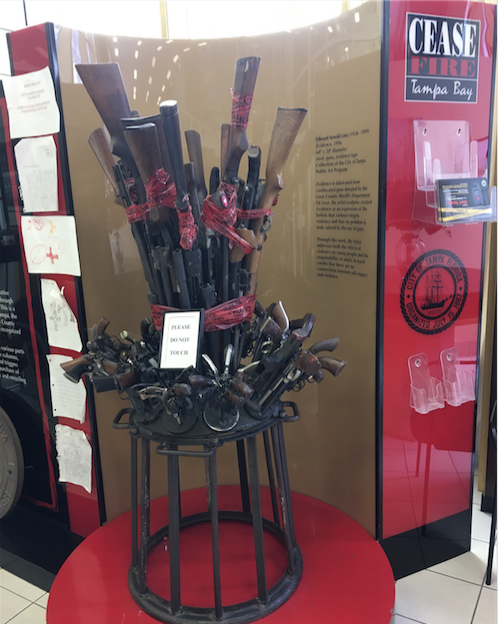 If you have been arrested for any offense involving a firearm, contact an experienced criminal defense attorney in Tampa, FL, to discuss your gun crime case today. We represent clients charged with firearm offenses in Hillsborough County, Polk County, Pasco County, Pinellas County, and the surrounding areas throughout the greater Tampa Bay area.

From the improper exhibition of a firearm to more serious offenses for armed robbery, we can help you aggressively fight the charges. Contact us to speak with an experienced criminal defense attorney about the facts of your case.