If the court issues a warrant for your arrest in Pasco County, FL, then call our office to discuss your case.

An arrest warrant can be issued after an investigation by the Pasco County Sheriff’s Office or a local law police department in New Port Richey, Port Richey, Dade City, Zephyrhills, or Land O’Lakes, FL.

We also represent clients after the court issues a bench warrant or capias because of a missed court date (failure to appear), violation of a pre-trial release condition, or violation of probation.

Let us help you confirm the existence of the warrant and find the best way to resolve the underlying case.

The four criminal defense attorneys at Sammis Law Firm are focused exclusively on criminal defense. We represent clients at the courthouses in both New Port Richey and Dade City, FL.

Visit our office at 7509 Little Road, New Port Richey, FL, conveniently located directly across from the courthouse at the West Pasco Judicial Center.

Contact us to find out the ways to best protect yourself after an arrest or after an active warrant is issued in Pasco County, FL.

After the case is resolved, we can also help you seal or expunge a record so that your mugshot and criminal history record can be removed (if you are otherwise eligible).

You can search the website of the Pasco County Sheriff’s Office for the latest information on an outstanding arrest warrant issued by a judge in the Dade City Courthouse or the New Port Richey Courthouse.

The website allows you to search by name, warrant number, incident number, or the date of the open warrant. The Pasco County Sheriff’s Office often delays posting information about an active warrant for several days or weeks while they attempt to serve the warrant (sometimes called the “pocket warrant”).

If you believe you have an active warrant, then you can contact a criminal defense attorney to discuss the particular facts and circumstances of the case.

Never incriminate yourself by speaking with any law enforcement officer about the facts of the case. Instead, work with your attorney to present all mitigating or exculpatory evidence that may help exonerate you. Your attorney is always in the best position to present information on your behalf.

After the court issues the arrest warrant for a failure to appear in court, your attorney may be able to file a “motion to withdraw the capias or warrant” so that you do not have to surrender yourself at the jail.

What Happens After the Arrest Warrant is Issued in Pasco?

After the court issues the warrant in Pasco County, FL, the authorities enter the information into a statewide computer system. The warrant can then be located by any law enforcement officer conducting a check (often called a “warrant inquiry”).

If you come into contact with a law enforcement officer, you risk an immediate arrest and incarceration. After an arrest outside of the state of Florida, you can be extradited to Florida and brought to the courthouse in New Port Richey or Dade City.

Turning yourself in at the jail after speaking with a criminal defense attorney is often the fastest and most convenient way to resolve the arrest warrant.

Law enforcement officers in Florida go to extraordinary means to serve outstanding arrest warrants and fugitive warrants including coming to your home or work.

What Happens After the Arrest on the Warrant in Pasco?

Even after your arrest, the State Attorney’s Office in Pasco County takes approximately twenty-one (21) days about whether it will formally file any charges. The prosecutor can refuse to file any charges, file reduced charges, file the same charges for which you were arrested, or file more serious charges.

Having an attorney during that twenty-one (21) day period may help you obtain the best possible result in your case.

Immediately after an arrest on an outstanding arresting warrant, you can post bond by cash or with a surety bond. But in domestic violence cases, the court requires that you first appear before the judge so that the judge can decide whether to issue a “no contact” order or a “no violent contact” order to protest the complaining witness or alleged victim of the domestic violence incident.

If your warrant has “no bond,” then contact an attorney immediately. A criminal defense attorney can often file an emergency bond motion to request the court to set a reasonable bond.

If the bond is too high, the attorney can ask the court to lower the bond which often saves the accused person money that would otherwise be spent on a bail bondsman.

The Fugitive Warrants Unit at the Pasco County Sheriff’s Office

The Pasco County Sheriff’s Office Fugitive Warrants Unit will usually refuse to give the public information on a warrant over the phone. Instead, a person without an attorney must appear in person at the Pasco County Central Jail located at the following location:

You can also find information on active arrest warrants issued in Pasco County on the FDLE website which provides access to warrant information for all wanted subjects in the State of Florida.

From time to time, the Pasco County Sheriff’s Office will conduct a “sweep” in order to effect as many arrests for outstanding warrants as possible within a specific period.

In October of 2011, the Pasco County Sheriff’s Office estimated that it had more than 22,000 outstanding warrants. Their goal is to bring that number down over time.

As reflected in the booking records for Pasco County in 2012, there are 7 different types of criminal charges responsible for the highest number of arrests in Pasco County, FL, including:

The attorney can ask the court to grant relief, or the case can be resolved if an agreement is reached with the prosecuting attorney. For example, the court could vacate the warrant or allow the case to be resolved through a diversion program or with a “withhold and court costs.”

Unfortunately, many people cannot afford a private attorney to help them through that process. The courts have come up with a helpful alternative for people who have an outstanding warrant but do not have a private criminal defense attorney.

According to a recent post on the Facebook profile for the Sixth Judicial Circuit, anyone with an outstanding warrant in Pasco County for a non-violent misdemeanor will have an opportunity to appear before a judge on Friday, Feb. 22, 2019, and perhaps have the case resolved.

Operation Safe Surrender, a project initiated by Pasco County Sheriff Chris Nocco, allowed anyone with an outstanding warrant in Pasco County for a non-violent misdemeanor to appear before the court, rather than risk getting picked up on the street and jailed later on.

According to a Facebook post from the Sixth Judicial Circuit Court of Florida, forty (40) defendants appeared before County Judge William Sestak at the West Pasco Judicial Center on Friday, Feb. 22, 2019, as part of Operation Safe Surrender.

Out of those 40 defendants, 32 were sentenced on the spot and four were taken into custody, according to the Pasco County Clerk of Court, which also participated in the project. Other defendants saw their cases reset for a future date.

The terms of the event are not to be confused with those underlying Veterans Stand Down, where the presiding judge often forgives fines and costs.

Operation Safe Surrender is not an amnesty program. Rather, it is a chance for those who have failed to show up in court to face non-violent misdemeanor charges to get back on track so they’re not picked up on warrants later on.

Examples of non-violent misdemeanors include retail theft, petit theft, drunken driving or DUI, disorderly intoxication, and county ordinance violations. More information is below in the sheriff’s flyer about the event. 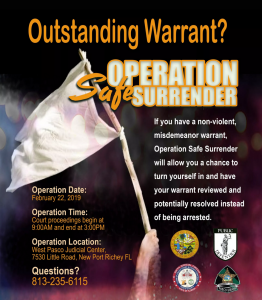 FDLE Search for Wanted Persons in Florida – The FDLE website has a search feature that allows members of the public to search for an outstanding arrest warrant issued anywhere in the State of Florida.

Pasco County Sheriff Active Calls – Visit the website of the Pasco County Sheriff’s Office to search for an active warrant, find the phone number to the jail, find social media links on Facebook for PSO, or find a list of the latest arrests. Find the call number, the entry time, the description, the priority of the call, and the location of the case within Pasco County.

Finding a Lawyer for a Warrant in Pasco County, FL

If you believe that a warrant for your arrest has been issued in Pasco County, FL, by a judge at the Dade City or New Port Richey Courthouse, then contact an experienced criminal defense attorney at the Sammis Law Firm.

Our criminal defense attorneys for Pasco County, FL, represent clients on a variety of warrants including:

No matter the reason the warrant was issued, we can help. We work hard to help you avoid a conviction so that your criminal history record or mugshot can be sealed or expunged.

This article was last updated on Thursday, January 21, 2021.