Boating Under the Influence (BUI) Cases

In Hillsborough County, FL, most BUI arrests occur during Gasparilla. In 2018, for example, the Florida Fish and Wildlife Conservation Commission (FWC) arrested fifteen (15) boaters for being impaired by drugs or alcohol while operating a boat.

For the first time, FWC has its “B.A.T. Mobile” on-site to administer field sobriety and breath tests more efficiently.

Nevertheless, a BUI arrest can occur at any time of the year. The Marine Unit, part of the Hillsborough County Sheriff’s Office, enforces Florida boating laws, monitoring no-wake zones, looking for boaters under the influence of alcohol, and performing boating safety checks.

The Marine Patrol Unit of the Tampa Police Department is also on the lookout for boaters who might be under the influence.

Florida Boating under the Influence (“BUI”) cases charged under Florida Statute Section 327.35(1) are treated seriously, in part, because Florida leads the nation in the yearly number of boating deaths.

Studies indicate that one-third of all recreational boating fatalities involve the use of alcohol. In more than one-half of these cases, the victim either fell overboard or capsized the boat.

If you have been charged with BUI or boating under the influence, you can expect the case to be aggressively prosecuted. The good news is that a BUI arrest does not always lead to a conviction.

In many of these cases, the charges are dropped altogether or reduced to another charge that is far less serious than BUI such as careless boating, a civil infraction.

If you were arrested in the Tampa Bay area for boating while under the influence (“BUI”) of an alcoholic beverage or while impaired by prescription medication or illegal drugs contact an experienced criminal defense attorney to discuss your case.

An arrest for boating under the influence or drunk boating (BUI) in Florida can lead to a criminal record, probation, possible incarceration, fines, court costs, community service, alcohol courses, and your boat being impounded.

For purposes of enhancing the criminal penalties, any prior DUI or BUI conviction counts as a prior for any subsequent DUI or BUI. See Section 327.35(6)(i) and Section 316.193(6)(m).

Attorney for BUI in Tampa, FL

Law enforcement officers in Florida that investigate BUI cases under Florida Statute Section 327.35(1) are forced to make difficult judgment calls when determining whether the operator of the boat is under the influence of drugs or alcohol.

Even under the best of conditions, well trained and experienced BUI officers can make mistakes.

If you have been arrested for Boating Under the Influence of drugs or alcohol in Florida, contact an experienced Tampa DUI Attorney to discuss your case in the Tampa Bay area including Hillsborough County, Pasco County, Pinellas County, or Polk County.

With offices in Tampa in Hillsborough County and New Port Richey in Pasco County, contact us to discuss your arrest for boating under the influence.

Problems with BUI Enforcement in Florida

Law enforcement officers that investigate a BUI case must often make a judgment call about whether to arrest a boater. Drinking alcohol and then driving a boat is not illegal.

The crime of BUI is committed only when the driver has consumed enough alcohol to be in excess of the legal limit of 0.08 (per se BUI) or when the driver’s normal faculties are impaired due to alcohol intoxication. When making these difficult judgment calls, law enforcement officers often make mistakes.

From the BUI officer’s perspective, a boat is a vehicle that requires safe operation. The safe operation of a boat is hampered when the boater is under the influence of alcohol or drugs (BUI).

The problem of drug or alcohol impairment is compounded for operators of boats because they are typically far less experienced on the water than driving a vehicle.

The lack of boating experience, combined with distractions that can occur while boating, including other boaters, weather conditions, and seasickness can intensify the effects of drugs or alcohol while boating.

Additionally, a boat operator’s impairment can be intensified by the marine environment, including wind, sun, engine noise, motion, and vibrations.

Elements of a BUI Criminal Charge

Although it is not illegal to consume an alcoholic beverage before operating a boat, it is illegal to operate a boat while under the influence of alcohol or drugs.

Under Florida law, Florida Statute Section 327.35(1), a BUI arrest can occur when either your blood alcohol concentration (BAC) is .08% or higher, or the law enforcement officer suspects that your normal faculties are impaired due to intoxication or drug impairment.

For persons under the age of 21 who operate a boat in Florida the legal limit is 0.02%.

An arrest for Boating Under the Influence (BUI) closer to the shore, or on lakes and rivers are typically made by Florida law enforcement officers and are prosecuted in Florida state courts.

Individuals charged with Boating Under the Influence (BUI) in Florida, under either state or federal law, face stiff punishments and minimum mandatory sentences which can include jail time, fines, boat impoundment and forfeiture, community service requirements, and the loss of your driver’s license.

Florida laws and federal laws against BUI pertain to all different types of boats (from canoes, rowboats to yachts and even the largest ships) — and includes foreign vessels that operate in U.S. waters, as well as U.S. vessels on the high seas.

Enforcement of BUI Laws in Florida

A law enforcement officer may stop any vessel for the purpose of checking for compliance with boating safety equipment requirements, whether it is numbered, unnumbered or documented.

Law enforcement agencies have the right to conduct a stop of the boat for the purpose of investigating whether the operator of the boat is under the influence of drugs or alcohol.

Legal Cause to Stop the Boat

BUI officers can conduct the stop when they have probable cause to believe a boat is violating a regulation or speeding. In certain cases, the BUI officers can stop a boat for a random inspection related to an equipment check, fishing compliance or safety registration.

The officer can ask the operator of the boat to perform a hand-held breath test or complete a series of sobriety exercises, or chemical tests of the boater’s blood, breath or urine.

For purposes of enhancement of criminal penalties and administrative driver license suspensions in a subsequent Florida DUI case, BUI counts as a prior conviction for driving under the influence (DUI). Likewise, if you have previously been convicted of DUI, your BUI sentence can be enhanced as provided below.

Definition of Operate in the BUI Statute

Section 327.50(1)(b), Florida Statutes, deals with vessel safety regulations and provides, “For the purpose of this section, ‘underway’ means at all times except when a vessel is anchored, moored, made fast to the shore, or aground.

Further, The Convention on the International Regulations for Preventing Collisions at Sea and the OOW Maritime Dictionary commonly define the term “underway” as meaning a vessel that is “not at anchor, or made fast to the shore, or aground.”

Pursuant to Florida Statutes Section 327.35, Boating Under the Influence (BUI) is illegal in the State of Florida. At trial, BUI must be proven in one of two ways:

The sentence can be enhanced if the operator of the boat has previously been convicted of BUI, DUI, DWI (or any other similar alcohol-related or drug-related offense) in the State of Florida, or in any other state.

Any conviction for BUI would include probation with a special condition that the defendant completes a substance abuse course which may include evaluation and any recommended follow up treatment, at least 50 hours of community service, and at least ten-day impoundment or immobilization of the boat or vessel.

In a BUI or DUI case, the Florida Fish and Wildlife Conservation Commission Division of Law Enforcement has developed form FWCDLE 108D (last revised on 09/05) which contains the implied consent warning for BUI cases.

The form has a place for the defendant’s name and case number. The officer is told to read only the paragraph applicable to the type of test you are requesting:

You are under arrest for operating a vessel or vehicle while under the influence of alcoholic beverages or chemical or controlled substance.

IF THE SUBJECT REFUSES TO SUBMIT TO TESTING, READ ONE OF THE FOLLOWING:

I am  [officer’s name] of the Florida Fish and Wildlife Conservation Commission (FWC).

Third BUI Violation outside of 10 Years of a Prior

Second Degree – BUI Manslaughter – BUI Causing or Contributing to Death can be charged as a Felony in the Second Degree punishable by up to fifteen (15) years in Florida State Prison.

The person is guilty of BUI and had a blood-alcohol level or breath-alcohol level of 0.20 or above, or if the boat operator had a passenger who was under the age of 18.

Second Within 5 Years of a Prior

Third or Subsequent Conviction within 10 years of a Prior

Florida law provides, the court has the power allow the defendant to serve all or any portion of a term of imprisonment to which the defendant has been sentenced pursuant to this section in a residential alcoholism treatment program or a residential drug abuse treatment program. Any time spent in such a program must be credited by the court toward the term of imprisonment.

Related Charges for Boating Under the Influence (BUI)

In the “Kelly Johnson Act” of 1998, the Florida legislature redefined the term “operate” with respect to vessels and added the language “to be in charge of”, or “in command of” a vessel.

A review of the 1998 statutory definition also shows inclusion of the following language:

“this definition shall not apply to a vessel owner or operator who designates a driver pursuant to s. 327.35”.

Under the current statutory definition of “operate”, however, this additional language has been removed.

The attorneys at Sammis Law Firm represent clients after they receive a Florida Uniform Boating Citation. Many of these cases involve a citation issued by FWC. The most common FWC Boating Citations include:

The Florida Uniform Boating Citation can allege violations of an ordinance or statute. If the citation is for a criminal violation, then a court appearance is required.

In any BUI case involving an administrative suspension of the boat operating privilege, the court will be asked to complete a form known as the FWCDLE 108F, last updated on 06/07).

The form is called the “ABSTRACT OF COURT RECORD AND REPORT OF DISPOSITION.” 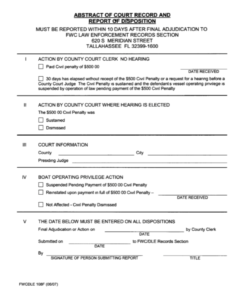 Adjudication – In Florida, any defendant that pleads guilty or no contest to boating under the influence (BUI) will be adjudicated guilty of the offense. Adjudication is mandatory under Florida Statute Section 327.36.

Probation – Under Florida law, all individuals that enter a plea of guilty or no contest to BUI must be placed on monthly reporting probation under Florida Statute Section 327.35(5).

Community Service – The court must impose a minimum of 50 hours of community service for a first-time offender convicted of boating under the influence or BUI. Florida law does not have a buy out provision which is expressly included in Florida’s DUI statute. See Florida Statute Section 327.35(6)(a).

License Suspension – A conviction for boating under the influence (BUI) does NOT provide for a driver’s license suspension.

Ignition Interlock Device – Florida law has no provision for an ignition interlock device in a BUI case.

Impoundment / Immobilization – The court must order the impoundment of the vessel used in the incident or anyone vehicle registered in the defendant’s name.