Home » What Happens at First Appearance in Hillsborough County, FL? 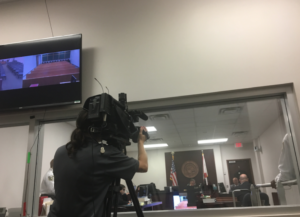 After an arrest, not everyone is able to immediately bond out of jail. Even some misdemeanor charges might result in a person being held until the first appearance court hearing.

The most common misdemeanor offense that requires a first appearance hearing is for domestic violence battery.

In a domestic violence case, the court will tell the person what they are charged with, set a bond (if they are eligible for a bond), and impose a “no contact” provision on the person so that they know not to have any contact with the alleged victim.

An attorney can appear at the hearing, review the criminal report affidavit to show why probable cause does not exist, and argue for the lowest possible bond amount or even release on recognizance (ROR) without any other burdensome pretrial release conditions.

The bond might be lowered or set at ROR if the attorney can show that the person is not a flight risk and has significant ties to the community.

This article explains when a first appearance hearing is required after an arrest in the Thirteenth Judicial Circuit in Hillsborough County, FL, for cases at the courthouse in Tampa and Plant City. FL.

If you need an attorney to represent you or a loved one at the first appearance hearing in Hillsborough County, FL, then contact an experienced criminal defense attorney at Sammis Law Firm. Our main office located in downtown Tampa, just a few blocks from the George Edgecomb Courthouse.

First appearance hearings are held 365 days a year. At Sammis Law Firm, we have four attorneys. One of our attorneys is on call each weekend or holiday to handle cases on an emergency basis.

We can also set up a jail visit remotely (usually on the same day) to speak with an inmate at the jail at Orient Road Jail or Faulkenburg Road jail if requested.

You need an aggressive and experienced attorney at all stages of the case including the first appearance hearing, the pre-file investigation. the arraignment, pre-trial conferences, motion hearings, and trial.

When a First Appearance Hearing is Required in Hillsborough County

If you are booked into the jail before midnight, then you will usually be on the schedule for first appearance the next morning at 8 am. You can attend court remotely through video conferencing access.

In some circumstances, a first appearance hearing is required in Hillsborough County, FL. Those circumstances are listed in an administrative order S-2018-022 (Uniform Bail Bond Schedule), which became effective on July 1, 2018.

According to the administrative order, the following persons who are arrested will not be released on a bail bond pending the arrested person’s first appearance hearing.

Additionally, the nature of the charge the person is arrested for might make the person not eligible for release on a bail bond pending the first appearance hearing including:

Special Procedures for Violations of a Conditional Release Program

Special procedures are required by §947.141(2), Fla. Stat., any offender who is arrested on a felony charge while on release supervision under any of the following programs:

In those cases, if the first appearance judge determines there is probable cause for the arrest, the offender must continue to be detained without bond for up to 72 hours, pending a decision by the Florida Commission on Offender Review to issue a warrant charging the offender with violation of the conditions of release.