COVID-19 Update: The attorneys at Sammis Law Firm have continued to attend PP court in Tampa for first appearance advisory hearings during the COVID-19 crisis.

Before you enter the courhouse, your temperature will be taken and you will be provided with a wrist band. You are required to wear a face mask at all times (one that is secure around the bottom of your chin).

You will be asked to maintain social distancing at all times while in the courthouse. The set up at PP court is the same as it was before, although witnesses might testify from the gallary while using a microphone instead of being brought to the witness stand.

During the week from Monday through Friday, the first appearance hearings are now being held at 1:00 p.m, instead of 9:00 a.m. (although you should call ahead to confirm). If you have PP court at 1:00 p.m., I would suggest arriving at least 30 mintues early.

Division “O” motion hearings are often scheduled at 12:30 p.m. on Monday through Friday.

On the weekend, the first appearance hearings (sometimes called the advisory or PP court) is still being held at 9:00 a.m. in Courtroom 17 (but arrive early).

On the weekend, the juvenile detention hearings are scheduled for 8:00 a.m., which is right before PP court.

What is PP Court in Tampa, FL?

In Tampa, FL, the first appearing advisory hearings are called “PP Court.” The hearings must occur within 24 hours after an arrest or shortly thereafter.

If the person is booked into the jail before midnight, then they will appear on the court’s calendar the next morning for a first appearance advisory hearing.

The rules for first appearance court in Hillsborough County, FL, are controlled by Administrative Order S-2012-063.

For an arrest made in Hillsborough County, any individual who does not immediately bond out of jail will be brought to first appearance court. For some types of charges, such as domestic violence, the person is not given any opportunity to post bond prior to the first appearance.

Many individuals retain a criminal defense attorney to represent them prior to the first appearance hearing.

The judge that oversees the proceedings is located at the main courthouse in Tampa. Video and audio equipment is then used to connect the three courtrooms.

Private attorneys typically appear at the main courtroom even when their clients are at the Orient Road Jail or the Faulkenburg Road ail. The public can also attend the first appearance hearing by going to the main courtroom.

The summary provided here is presented only for informational purposes. New administrative orders or procedures may apply, especially during the COVID-19 health crisis.

No one should rely on this information without talking to a Tampa criminal defense attorney experienced in handling emergency bond hearings in Hillsborough County, FL.

Contact an attorney at Sammis Law Firm to discuss the particular facts and circumstances of your case.

Retaining an attorney prior to the bond hearing is often the best way to make sure a reasonable bond is set or that an individual is released ROR (or on a signature bond without posting any money) when appropriate.

Additionally, an attorney can present favorable evidence to the prosecutor to request or demand that no charges are formally filed, or that only reduced charges are filed.

Often the 21 days after the arrest are the most important part of the case.

The attorneys at Sammis Law Firm are also experienced in helping the defendant bring a petition for a writ of habeas corpus to a higher court to test the legality of the circuit court’s order setting bond and imposing other conditions of pre-trial release.

When appropriate, the appellate court could grant the writ and vacate the erroneously imposed bond requirement.

Contact us to speak with an attorney immediately about your case.

What is First Appearance Court?

For the proper and efficient administration of justice, the judges in Hillsborough County have found it necessary to operate a special division to handle the following:

First appearance court also handles certain emergencies in criminal cases, misdemeanor violations of probation, and other matters that the chief judge may designate.

For more than 22 years, the Thirteenth Circuit Court has operated the First Appearance and Emergency Criminal Division. This division is called Division “O.”

Today, division “O” uses audio and video devices to conduct certain court proceedings for individuals that are incarcerated at the Orient Road Jail or the Faulkenburg Road Jail.

In an administrative order that became effective on January 1, 2013, many of the procedures for First Appearance / Emergency Division “O” updated.

The chief judge signed the order under the power granted by Article V, section 2(d) of the Florida Constitution; Section 43.26, Florida Statutes; and Florida Rule of Judicial Administration 2.215(b)(2).

The judge hearing a case in first appearance court should have certain information including:

Is Bond Set at First Appearance?

The Hillsborough County Administrative Order ADM ORD 5-2008-160 for the Thirteenth Judicial Circuit provides that “no bond” will be allowed prior to the first appearance in certain cases.

Those cases with no bond include:

Additionally, crimes charged under the gang enforcement provisions or subject to enhanced penalties under Florida’s Gang Enforcement and Prevention statutes in Chapter 874 are also ineligible for bond prior to first appearance pursuant to Florida Statute Section 903.046(2)(1).

The administrative order provides that the different types of proceedings to be handled in First Appearance / Emergency Criminal Court Division “O” include all of the following:

“No Bond” Requirements under Florida Law

In other words, the judges can either lower the bond or raise the bond at first appearance. Instead, the judges are to follow the criteria set out in Florida Rule of Criminal Procedure 3.131 and Florida Statute Section 903.046.

If the individual is arrested for any offense on the list provided below, then that individual will not be eligible for bond prior to the first appearance.

At first appearance, the judge can determine if any bond will be set depending on the particular facts and circumstances of the case. The list of offenses that are not eligible for bond prior to the first appearance include:

If the individual is arrested for a failure to appear warrant or arrested on a violation of probation warrant then the bond will normally be the amount provided for in the warrant itself.

If the warrant does not provide for a certain bond amount to be set, then the judge at first appearance may continue the “no bond” requirement until the case is heard before the judge that issued the warrant.

Under most circumstances, the judge at first appearance does have the discretion to set bond in accordance with the provisions of this administrative order.

Any individual arrested for a crime may be released on bond under the uniform schedule prior to the first appearance unless the “no bond” procedures set under sections 2 and 3 of this administrative order apply.

The bond schedule is based on the degree of the offense or the type of charge in some cases.

Under these circumstances, a release from custody, without conditions, places the defendant in the same position (from a custodial, liberty and supervisory standpoint) he was in prior to his arrest.

The singular exception, provided by rule, is that the defendant who has been released from custody must appear for trial. See Fla. R. Crim. P. 3.133(a)(5) (“A release required by this rule does not void further prosecution by information or indictment but does prohibit any restraint on liberty other than appearing for trial”).

This “condition” merely recognizes that a finding of no probable cause does not terminate the prosecution, and the court maintains jurisdiction over the case and the defendant.

As a result, the defendant remains subject to the court’s order that he appear for trial. Even the defendant has conceded the viability of this requirement for one who has been “released from custody” without conditions.

If the court does not find probable cause at an adversary preliminary hearing, then the court can still grant release.

If formal charges are filed thereafter, the defendant is “released on recognizance, subject to the condition that he or she appears at all court proceedings.”

New Charges as a Violation of Pre-Trial Release Conditions

If the defendant is no bond after a preliminary finding of probable cause and is then arrested for new charges allegedly committed while the prior case is still pending, then the court can find that the new charges are a violation of pre-trial release conditions in the first case.

(1) As a condition of pretrial release, whether such release is by surety bail bond or recognizance bond or in some other form, the defendant shall:

(a) Refrain from criminal activity of any kind.

Under Section 907.041, Florida Statutes (2013), “a court may, on its own motion, revoke pretrial release and order pretrial detention if the court finds probable cause to believe that the defendant committed a new crime while on pretrial release.”

Additionally, for the new charge, the court can consider the defendant’s pending charge in determining the amount of bail or other conditions of release for the new arrest.

For example, Section § 903.046(2)(g), Fla. Stat. (2013), provides that when determining whether to release a defendant on bail or other conditions, the court shall consider “[w]hether the defendant is already on release pending resolution of another criminal proceeding.”

Rule 3.133(c) Motions to Reconsider the Question of Probable Cause

The State had an available remedy if it wants the court to reconsider the question of probable cause and the defendant’s release status.

The State can file a motion under rule 3.133(c), which provides:

A defendant who has been retained in custody or returned to custody by such a determination shall be allowed an adversary preliminary hearing in all instances in which a felony offense is charged.

The Florida Legislature has recently enacted certain laws which limit the discretion of a judge to set bond in certain cases unless certain procedures are followed.

This legislation required the Chief Judge in Hillsborough County to modify the administrative rules in order to comply with the recent legislation. 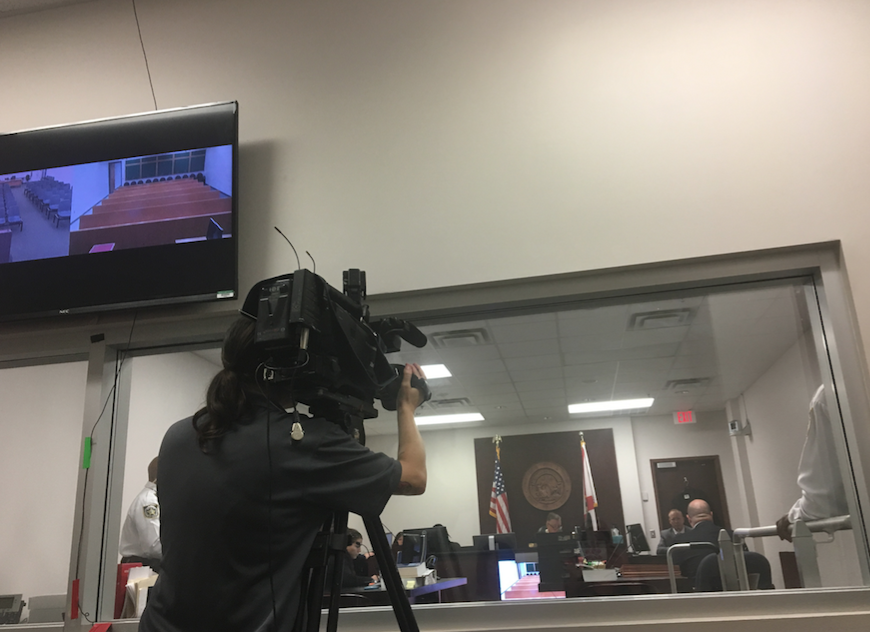