If your blood was taken at the hospital, can it later be used as evidence to prosecute you for DUI? The short answer is “Maybe.

In a few cases, the investigating officer will immediately get a warrant and then come into the hospital to seize the blood sample taken by the medical professional. In Florida, the use of a subpoena for that purpose is relatively rare.

In those cases, your attorney might contest whether probable cause supported the issuance of the warrant or demand a Franks hearing to suppress evidence gained from the search warrant because of false statements or omission in the affidavit.

Even if the investigating officer got a warrant to seize the vials of blood or serum from the hospital, an additional court order is usually required before the sample can be sent to the crime lab for analysis.

The more common situation arises when the prosecutor seeks a subpoena to obtain the notation in the medical records showing the BAC level.

If the prosecutor gets the medical records, the prosecutor can attempt to use those records against the defendant in a criminal prosecution for DUI-related crimes.

That notice can be issued either before or after an arrest is made. If you received such a notice, your criminal defense attorney can object to the subpoena being issued which then triggers the so-called “Hunter Hearing.”

During the Hunter Hearing, your attorney can argue all of the reasons that a subpoena for the blood test results should not be issued. Even if the prosecutor gets the records, your attorney can fight to keep those records out of evidence at trial.

The hospital will usually perform a blood plasma (serum) test instead of testing whole blood. The plasma blood test is performed on the liquid portion of a drawn blood sample after the solid cellular components have been removed.

Because the alcohol is concentrated in a serum sample, it is higher than a whole blood sample. The narrative sections of the medical records might say “severe intoxication” or the “blood alcohol was ____.”

For a legal blood test, the test is performed on whole blood or blood that has not been broken down into solid and liquid components.

An attorney can help you understand how a hospital blood test might impact your criminal case. We can help you learn more about the difference between a whole blood test and a blood plasma (serum) test.

The distinction between the hospital blood and the legal blood becomes important when considering the reported BAC results because a plasma test will produce a result that is more than 10–15% higher than a whole blood test drawn at the same time.

Expert testimony is usually required to explain how the plasma BAC would equate to a determination of whole blood BAC.

Furthermore, the DHSMV should NOT be able to base an administrative suspension on a hospital blood draw, but unless you demand a formal review hearing within 10 days after the suspension is triggered, you waive the right to contest that issue.

Are Hospital Blood Tests Admissible in DUI Cases in Florida?

After the United States Supreme Court’s decision in Crawford v. Washington, 541 U.S. 36 (2004), the predicate steps necessary to introduce such evidence are far more complicated in order to satisfy the requirements of confrontation, but it remains clear that such medical tests can be relevant to establish a DUI.

Given the differences between legal blood tests and medical or serum blood tests, at a minimum, a hospital blood test may need to be supported by additional expert evidence to be relevant and admissible in a case under a blood-alcohol theory.

But in a case under an impairment theory, medical or serum blood tests are more likely to be admissible with a lesser degree of expert testimony. See J.J. Paul, III, DWI: Blood, Tests & Fears: A Crash Course in Blood Alcohol Samples, 25 Champion 39 (June 2001); Carol A. Roehrenbeck & Raymond W. Russell, Blood is Thicker than Water: What You Need to Know to Challenge a Serum Blood Alcohol Result, 8 Crim. Just. 14 (Fall 1993).

DUI can be established under several alternative theories. In cases involving alcohol intoxication, a prima facie case can be established by proof that a person operating or in actual physical control of a vehicle is “under the influence of alcohol . . . to the extent that [his or her] normal faculties are impaired,” § 316.193(1)(a), Fla. Stat.

The criminal defense attorney will then object to the results of the hospital’s BAC test performed for the purposes of medical treatment. Those objections might center around the notation in the medical records being hearsay, irrelevant, or are in violation of the confrontation clause.

Although the notation of a BAC level in the hospital records are hearsay, the state will often argue that the blood test results in the medical records are a business record exception. That exception only applies if the blood report is untrustworthy.

The defense can challenge the trustworthiness of the hospital records by evidence from the quality control records of the hospital through its lab director including the maintenance log, package insert and method of the alcohol measuring instrument.

Many hospitals use the VITROS 950 or similar types of preliminary tests. The hospital lab director will often admit that the hospital blood tests are not scientifically accurate but are merely used as screening tests to determine approximate levels of alcohol in order to evaluate the patient’s condition and to prescribe medications.

The defense can often call its own expert including a Forensic Toxicologist to show that the BAL in the medical records are not consistent with the patient’s clinical presentation. The defense expert can also explain the testing method as specified in the manufacturer’s instructions which disclose the reportable dynamic range of the VITROS alcohol device was up to 300 MG/DL.

If the patient’s reading is “out of range” and was subject to “sample dilution” then it must be retested according to the manufacturer. When no sample dilution was performed and the hospital ignored the manufacturer’s instructions to confirm the results by gas chromatograph, then the hospital blood specimen might contain a possible false-positive result caused by a crush injury.

In many of these cases, the hospital testing lacked quality control when there is no proper chain of custody to prevent a source of contamination of the specimen and the hospital used serum, not whole blood.

The blood tests in these cases do not always comply with the common law for scientific tests because no three-prong proper predicate can be established. That predicate requires a showing of the following:

The results might not be reliable because it involved the extraction of arterial rather than venous blood, an alcohol swab was used at the extraction site, and the testing method resulted in mistaking other chemicals in the blood for alcohol. Many of these tests are performed without any of the safeguards that would be present in a forensic laboratory.

Actual deficiencies in this particular test can be shown. In many of these cases, the prosecution has very little information about who extracted the blood or their qualifications.

In some cases, the prosecutor has not listed an expert who can testify about the meaning of the test by converting the serum blood alcohol result into a whole blood alcohol reading that would indicate significant alcohol intoxication.

Other problems can result when there is an insufficient showing of the chain of custody. In many cases, the blood alcohol test report is for medical purposes only and the testing parameters do not meet requirements for legal interpretation.

How to Convert Serum and Plasma Results to Whole Blood

Since it represents the water portion of whole blood, serum or plasma will have a higher AC than the whole blood from which it is derived.

To convert a serum alcohol concentration to a whole blood equivalent:

If necessary, convert the units to g/100 mL.

Conversion Between Alcohol Concentrations in Whole, Plasma, and Serum Blood

Enzymatic assay testing is used in hospitals for determining the alcohol concentration in plasma or serum. The plasma is gathered when whole blood is centrifuged or spun and the red blood cells, white blood cells, and platelets are removed.

The serum is gathered in the same way except that coagulation proteins are also removed.

Different conversion numbers are used by different experts. The most common range used is .13 to .20. In some cases, a technical supervisor will use .16.

Medical Records are Protected as Private by the Florida Constitution

Under the Florida Constitution, medical records are protected as private. Article I, section 23’s guarantee that “[e]very natural person has the right to be let alone and free from governmental intrusion into the person’s private life” has been held to protect an individual privacy interest in medical records. See State v. Rivers, 787 So.2d 952, 953 (Fla. 2d DCA 2001).

To overcome a person’s right to keep his or her medical records private, the prosecutor with the State of Florida is obligated to prove that it has a compelling interest in having the records disclosed. Id. at 953.

One way in which the prosecutor with the State Attorney’s Office can carry that burden is to prove that the medical records are relevant to an ongoing criminal investigation. See Rivers, 787 So.2d at 953.

A trial court departs from the essential requirements of law when it allows disclosure of medical records absent such proof (or proof of some other compelling interest). Id.

In Faber v. State, 157 So.3d 429, 431 (Fla. 2d DCA 2015), the court granted a certiorari petition where the trial court allowed disclosure of medical records in response to the State’s request. In that case, the appellate court held that the trial court departed from the essential requirements of law where it authorized a subpoena for medical records where “the State presented an insufficient nexus to establish the relevance” of the records.

As the court framed the issue in Rivers, the dispositive question is whether the State has presented a “reasonable founded suspicion” that the records it seeks are relevant to an ongoing investigation. 787 So.2d at 953.

The State must show a “nexus” between the medical records the State seeks and some material issue in the case by:

Faber, 157 So.3d at 431 (requiring that the State demonstrate a “nexus” between the records and some relevant issue).

Blood Alcohol Concentration Testing Emergency Room Investigation Analysis Study – Find a scholarly article on a one year review of blood alcohol concentration tests and the actual use of BAC testing in an emergency department. Published on November 4, 2015, the article examines under what circumstances emergency medicine doctors and nurses request BAC testing. BAC testing is most often performed in the context of an alleged overdose or after a motor vehicle accident.

If your case for driving under the influence (DUI) involves blood testing, then contact an experienced DUI defense lawyer in Tampa, Florida. The attorneys at Sammis Law Firm in Tampa, FL, are experienced in representing clients throughout the Tampa Bay area.

Find out more about the charges pending against you, the method used for your DUI blood test, and defenses that might apply to your case. We fight a variety of DUI cases involving testing of blood including:

Our main office is located in downtown Tampa, FL. We also have a second office located in New Port Richey across from the West Pasco Judicial Center. 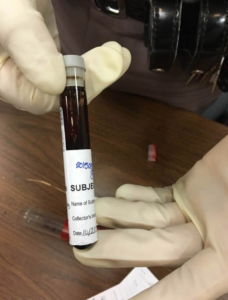