The Detention Center is responsible for the care and custody of those arrested in this county by the Hernando County Sheriff’s Office and other state and local police agencies.

The jail in Hernando County is authorized to hold 744 inmates. Both adult male and female inmates are detained in the facility, as well as juveniles between the age of 14 years old and 17 years old being charged as an adult.

Attorneys for the Detention Center in Brooksville, FL

Criminal defense attorneys are allowed to visit inmates in the Hernando County Detention Center for a free and confidential consultation. The consultation can often be scheduled for the same day or the next day.

The inmates are also allowed to call the attorney’s office to request a free consultation or a family member can make the request on their behalf.

If no bond has been set or if the bond is too high, our attorneys can also contact the State Attorney’s Office of quickly schedule an emergency bond hearing.

Contact an experienced criminal justice attorney for Hernando County, FL, at Sammis Law Firm to schedule a free and confidential consultation at the jail.

During the consultation, we can discuss the pending charges, the best defenses, and ways to avoid the typical punishment.

Reasons for Detention at the Jail in Hernando County, FL 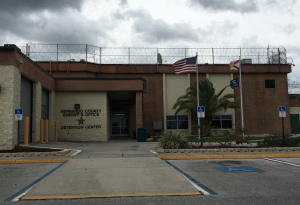 An inmate in the Detention Center might be detained for any number of reasons including:

In addition to the Hernando County Sheriff’s Office, other law enforcement agencies operating in Hernando County use the detention center for central booking and intake.

After an arrest in Hernando County, FL, the inmate’s booking information sheet will show when the inmate was booked into the Hernando County Detention Center, the booking number, the charges, and the bond (if any).

The booking information also shows whether the jail has a “hold for extradition” on release, or another type of hold for another state or county.

If the inmate is not a U.S. Citizen, then the jail might add an ICE hold to allow the federal authorities to further detain the inmate on an immigration issue.

To obtain the final disposition of any criminal charges please contact the Clerk of the Circuit Court in Hernando County.

Arrest Warrants in Hernando County – If you have an active arrest warrant in Hernando County, FL, issued by the judge in Brooksville, then find out more about the best ways to resolve the warrant and the underlying charge.