Were you served with a petition for a protective order? These petitions are intended to protect people from acts of domestic violence, dating violence, repeat violence, or stalking.

In Florida, the protection orders are often called “restraining orders” or “injunctions.”

If you were served with a petition for an order of protection Pasco County at the courthouse in New Port Richey or Dade City, then you have come to the right place. The attorneys at the Sammis Law Firm aggressively defend people at these injunction hearings against false or exaggerated claims.

Just because the court granted the temporary request for an ex parte protective order does not mean that the judge will find sufficient evidence to support the allegations at the return hearing, especially when you are represented by an experienced attorney who can present your side of the story.

Never violate the temporary injunction or let anyone else contact the petitioner on your behalf. Instead, follow the letter and spirit of the order to cease all contact with the other person.

Act quickly. The hearing is usually scheduled within 15 days of when the petition is filed. An attorney can help you aggressively fight the allegations with the goal of getting the case dropped.

When you hire an attorney, the attorney can investigate the allegations and talk with everyone involved.

Attorneys for Injunctions for Protection in Pasco County, FL

With offices conveniently located in New Port Richey, FL, our attorneys represent clients in injunction hearings throughout the Sixth Judicial Circuit in Pasco County including:

Call an attorney that is familiar with the procedures that are most effective to fight against false or exaggerated allegations leading to a petition for a protective injunction order.

Because these cases involve allegations of violence, protective hearings are quasi-criminal proceedings that come with a lifetime of consequences.

We also represent clients at protective order hearings for an injunction in Dade City, FL.

In many of these cases, we also represent clients charged with domestic violence crimes in Pasco County, FL.

The petitioner is not charged a fee for filing a domestic, stalking, repeat, dating or sexual violence petition. After the petition is filed, the Sheriff of the county where the respondent is located will serve the Respondent with a copy of the petition.

The Clerk will help the petitioner file a petition for a Domestic Violence Injunction (sometimes called a restraining order).

In Pasco County, the Clerk’s Office also helps the petitioner decide on the right forms to use depending on whether the allegations involve domestic violence, stalking, repeat violence, dating violence, or sexual violence.

Stages of an Injunction for Protection Case in Pasco

The stages of an injunction for protection case in Pasco County, FL, include the following:

An experienced attorney in Pasco County, FL, can help you decide the best way to get an injunction for protection modified or dismissed.

Why was the Temporary Injunction for Protection Granted?

The Petitioner begins the process of seeking a protective order by appearing at one of the courthouses in Pasco County, FL, and filling out a form.

These petition and other required forms can be submitted at the courthouse in either New Port Richey or Dade City, FL.

The process of determining whether the petitioner be granted a temporary injunction or protective restraining order is made on an “ex-parte basis.”

That means the judge only gets to hear one side of the story and must assume the allegations to be true.

The Respondent does not have an opportunity to be heard until the return hearing which is usually scheduled just a few weeks later.

If the Respondent fails to appear, then the protective order will most likely be granted on a long-term or permanent basis.

Defending Against False or Exaggerated Accusations of Violence

In many of these cases, the Petitioner is motivated to make false or exaggerated accusations. If you did not commit prior acts of violence or do not pose any threat of future violence, then you should contest the injunction.

If the injunction is granted, then you may lose certain important civil rights including the right to possess a firearm or ammunition.

More importantly, you can never seal or expunge the record alleging violence even if the judge ultimately finds that the accusations are unfounded.

Allegations made in protective injunction petitions typically show up during even routine background checks for employment.

In many cases, the existence of the petition and of the unverified allegations contained in the petition are defamatory and cause unwarranted damage to the reputation of the person named as the respondent.

Florida law does not currently provide for the correction of the public record by the removal of such a petition.

Removing the record from public view would be the only means of protecting the reputation of an individual named in such a petition, but that option is not currently available under Florida law.

In other words, you can’t seal or expunge the records related to the filing of the petition or the petition itself.

The Violence Injunction Hearing is in a Few Days, What Can I Do?

In many of these cases, the Respondent is served with the temporary protective injunction just a few days before the return hearing is scheduled.

For that reason, the Court will consider a motion to continue the hearing with good cause.

If you have retained an attorney to defend you the attorney may ask for a continuance to do any of the following:

If you are served with a petition for an injunction and plan to hire an attorney, it is important to hire the attorney as quickly as possible and before the return hearing. Your attorney is in the best position to ask for the continuance. 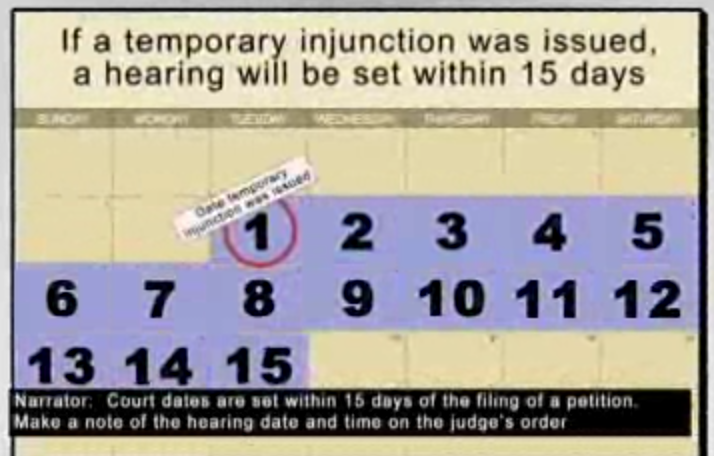 Where are Injunctions for Protection Cases Heard in Pasco County, FL?

A hearing on the petition for an injunction for protection against domestic violence, repeat violence, sexual violence, stalking or cyberstalking will be held at one of the following addresses:

Although there are no case managers specifically assigned to civil domestic violence in Pasco County, the staff assisted in setting 87 orders to show cause hearings for non-compliance with the court’s order and staff attended 6 hearings identified for possible assignment to the unified family court in West Pasco.

Florida Law provides that domestic violence can include any type of criminal offense resulting in physical injury.

In addition, the following types of criminal offenses are included within the definition of domestic violence as defined in Florida Statutes Chapter 741:

For a petition for domestic violence, the petitioner and respondent must be domestically related. This means that the act must occur between two people who are:

The Florida legislature recently passed a new law that applies to Domestic Violence Injunctions. Effective on July 1, 2020, that new law authorizes a court, when granting a domestic violence injunction, to:

“two incidents of violence or stalking committed by the respondent, one of which must have been within 6 months of the filing of the petition, which are directed against the petitioner or the petitioner’s immediate family member.”

For purposes of an injunction for stalking in Pasco County, Florida Statutes Chapter 784 defines stalking as:

“Someone is purposefully following or harassing you repeatedly over a period of time for no legitimate purpose, causing you emotional stress.

If in doing so, he/she threatens your life or threatens to harm you, with the intent to cause you reasonable fear for your safety, then the act becomes aggravated.”

If you were served with a temporary injunction for protection against stalking under Florida Statute Section 784.0485, then contact an attorney at the Sammis Law Firm today.

For purposes of an injunction for protection from dating violence in Pasco County, FL, Florida Statutes Chapter 784 defines dating violence as violence between individuals who have or have had a continuing and significant relationship of a romantic or intimate nature.

Dating violence does not include violence in a casual acquaintanceship or violence between individuals who only have engaged in ordinary fraternization in a business or social context.

The existence of such a relationship shall be determined based on the consideration of the following factors:

Pasco County Courts Protective Injunctions – Visit the Clerk of Court website for information on the processes and procedures used to obtain an injunction for protection (sometimes called a “restraining order”) against domestic violence, dating violence, stalking violence or repeat violence.

If you were served with a petition for an injunction against violence, including domestic violence, dating violence, stalking, or repeat violence, then contact an experienced criminal defense attorney with offices in New Port Richey, FL, at the Sammis Law Firm.

We represent clients throughout Pasco County, including at the courthouse at the Dade City courthouse and the New Port Richey courthouse.

If the allegations made against you are false or exaggerated, you need an attorney to represent you and fight for an outright dismissal of the petition. We can begin your case today.