Hit and Run Investigations in Pasco

If you were involved in a traffic crash that caused more than $50 in damage to attended or unattended property or an injury to another, then you were required to stop at the scene.

If you left the scene before providing all of the information required under Florida law, then you might be charged with either a felony or a misdemeanor offense.

The way the crime is charged depends on the damage caused including:

Before you can leave the scene, Florida law requires you to provide certain information including your driver’s license, registration, and proof of insurance.

If you made a mistake by leaving the scene, then don’t compound that error by trying to represent yourself during a criminal investigation. Instead, immediately contact an experienced criminal defense attorney who can represent you at every stage of the case.

Attorney for Hit and Run Investigations in Pasco County, FL

The attorneys at the Sammis Law Firm have an office in New Port Richey, FL, across from the courthouse at the West Pasco Judicial Center.

We are experienced in representing clients after a hit and run crash in both West Pasco and East Pasco at the courthouse in New Port Richey or Dade City.

Contact us to discuss how we can help you invoke your right to remain silent so that the investigating officer doesn’t attempt to come to your home or office to interrogate you about how the crash occurred.

If you hire us, we can immediately contact the investigating officer to make sure your rights are protected. We can also help you deal with the insurance company if any claim is made against you so that the claim can be settled properly.

After an allegation that you committed a criminal traffic offense in Pasco County, FL, call 727-807-6392.

Legal Duties after a Traffic Crash

If you were involved in a crash causing more than $50 in damages, then Florida law requires you to stop at the scene of the accident and provide your name, address, driver’s license, insurance, and car registration information to the other party.

If the crash resulted in personal injury or death, then you have an extra duty to provide reasonable assistance to the victim by making arranging for emergency medical care.

If you fail to do live up to these legal duties after the crash, then you can be charged with leaving the scene of an accident.

Penalties for Hit and Run in Florida

In Florida, the penalties for leaving the scene depends on the type of damage caused by the crash. Leaving the scene crimes charged as a misdemeanor or a felony depending on the way the crime is charged including:

Active Calls for Hit and Run in Pasco – Visit the website of the Pasco Sheriff’s Office to find a list of active calls, including investigations for hit and run traffic crashes. Each active call has an assigned “call number.” The website includes the “entry time” showing when the call was first reported or when a deputy sheriff initiates the call based upon observation of activity. The website shows the “location” which is the general geographic location of the call within Pasco County. 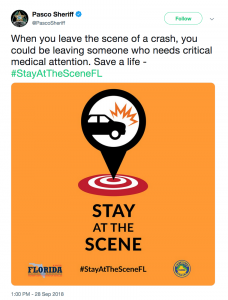 This article was last updated on Wednesday, November 27, 2019.