In Florida, the Florida Department of Transportation estimates that impaired driving is involved in about 25% of all motor vehicle deaths.

Although alcohol has a per se limit of 0.08, Florida law does not recognize any specific impairment limit for marijuana or controlled substances.

Attorneys for Impaired Driving in Florida

If you were accused of impaired driving in Florida, then contact an experienced criminal defense attorney in Tampa, FL. Although most DUI arrests involve allegations of alcohol intoxication and a breath test on the Intoxilyzer 8000, the number of cases involve criminal or controlled substances have increased.

Impaired driving cases that don’t involve alcohol often involve allegations that the driver used marijuana or controlled substances. These cases often involve a request for a breath test, a blood test, or a refusal to submit to testing.

Contact us to discuss the drug impairment charges pending against you, possible defenses, and the best ways to fight the case.

Impaired Driving Defined by FDOT – The Florida Department of Transportation defines the term “impaired driving” to mean driving under the influence of alcohol and/or legal (prescription and over-the-counter) and/or illegal drugs. Florida’s Impaired Driving Program supports a variety of strategies that target individuals driving impaired.  To combat impaired driving, FDOT grant funds for a variety of purposes including purchasing DUI enforcement equipment and promoting specialized education for law enforcement and prosecution. FDOT grant money also funds the Florida Impaired Driving Coalition (FIDC). The goal of the FDOT grant money is to increase effective DUI adjudication and drive down the number of impaired driving fatalities.

Impaired Driving Safety Center – Visit the website of the Florida Department of Highway Safety and Motor Vehicles (DHSMV) to learn more about driving high. The website has information about the “Drive Baked, Get Busted” education campaign focused on the dangers of marijuana-related impaired driving.

CDC on Impaired Driving – Visit the website of the Centers for Disease Control and Prevention (CDC) to find out more about cost data and prevention policies. The CDC works to strengthen policies related to preventing alcohol-and drug impaired crash-related injuries and deaths.

Is Florida’s Effort to Stop Marijuana Impaired Drivers Half Baked – Find out why the FDHSMV is spending more than 5 million dollars on a public relations campaign called “Drive Baked, Get Busted” to warn people about the dangers of driving while impaired by marijuana. The campaign is criticized for being an anti-marijuana campaign with high drama and low information that is intended to target recreational use. Florida is also starting to track the number of marijuana-related DUI citations, accidents and arrests. The article explains why testing for marijuana impairment by measuring THC in the blood and urine is more difficult than measuring a BAC level. 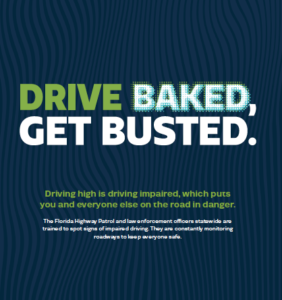