Is Hemp Legal in Florida?

Florida had a choice between creating a hemp industry or allowing officers to continue to make low-level marijuana arrests. With unanimous bipartisan support, the Florida legislature chooses an industrial hemp program and a Republican Governor signed the bill into law.

The passage of Florida’s State Hemp Program (2019 CS/CS/SB 1020) on July 1, 2019, dramatically changed the way judges and prosecutors are looking at these cases.

As a result, criminal defense attorneys in Florida are telling their clients with the dwindling marijuana and cannabis cases to fight until the charges are dropped or dismissed. Prosecutors have begun announcing that they will no longer prosecute these cases.

Now that hemp is legal in Florida, prosecutors are being forced to drop these cases because of the practical problems in getting past motions to suppress before trial or the evidentiary problems at trial. And even if the prosecutor was able to overcome those hurdles, jurors are reluctant to convict anyone for a marijuana crime now that hemp and medical marijuana are legal in Florida.

Many of these cases involve the smell of marijuana leading to the search or seizure of the evidence. The legalization of hemp in Florida (under both state and federal law) effectively negates probable cause for marijuana-related offenses since cannabis and hemp smell the same.

The nose of an officer or a K-9 can not distinguish between low THC hemp and high THC cannabis.

State Attorney Jack Campbell in Florida’s Second Circuit recently wrote a letter explaining why he will not authorize search warrants involving an officer or K-9’s smell of marijuana (because it might be hemp). This same logic should apply when a criminal defense attorney files a motion to suppress an illegal search based on the same type of sniff or smell search.

No Presumptive or Field Tests to Distinguish Between Hemp and Cannabis

For law enforcement officers and prosecutors, these new hemp legalization statutes created a problem. No good way currently exists for officers to differentiate between cannabis (which is illegal) from hemp (which is legal). In order to seize the cannabis as evidence, the law enforcement officers need a presumptive or roadside test that is scientifically reliable for the purpose of establishing probable cause.

The prosecutor’s letter also explains why his office is done prosecuting most marijuana crimes until a reliable field test (often called the presumptive test) can be developed to distinguish cannabis with high levels of THC from hemp with less than .03 percent of THC by dry weight. That problem might lead to the court throwing out evidence because of an illegal arrest that lacked probable cause.

No Lab Tests to Prove the THC Concentration

Even if law enforcement officers can overcome that hurdle, a second problem exists because the prosecutor needs full quantification testing for trial and an expert who can explain the test results in a way that complies with the Daubert predicate. Daubert v. Merrell Dow Pharm., Inc., 509 U.S. 579, 585 (1993).

The prosecutor’s letter also explains the problem with finding cost-effective lab testing to determine whether the THC level is actually over or under .03 percent by dry weight.

Hemp became legal under state law in Florida when the Florida Legislature passed 2019 CS/CS/SB 1020. The legislation authorized the Florida Department of Agriculture and Consumer Services to create a state industrial hemp program to administer and oversee the sale, processing, handling, and cultivation of hemp.

The new legislation revised the legal definition of “cannabis” under Section 893.02(3), F.S., to exclude “hemp” and “industrial hemp.”

To further complicate matters, the legal definition of “marijuana” as defined in s. 381.986, was separated from “cannabis” if the substance was manufactured, possessed, sold, purchased, delivered, distributed, or dispensed, in conformance with s. 381.986, F.S., [the Compassionate Medical Cannabis Act of 2014].

Likewise, the Agricultural Improvement Act of 2018 (2018 Farm Bill) legalized the industrial use of hemp under federal law and removed it from the U.S. Drug Enforcement Agency’s list of controlled substances.

Why Does Florida Have a State Hemp Program?

On Tuesday, June 25, 2019, Gov. Ron DeSantis signed legislation authorizing Florida’s state hemp program. With unanimous bipartisan support, the legislation created an industrial hemp program to be managed by the Florida Department of Agriculture. The program will regulate the licensing and cultivation of hemp.

As explained in a statement released by Agriculture Commissioner Nikki Fried:

“Tonight’s hemp bill signing marks a transformation in Florida, and a critical step on the journey to creating a green industrial revolution, strengthening agriculture with an alternative crop of the future, and expanding access to safe, quality CBD products…..

…Florida has the potential to become the gold standard on hemp — our deep agricultural heritage, climate and resources, and farming infrastructure will make Florida a national leader in this emerging new economy.”

Holly Bell was appointed as Florida’s first Director of Cannabis to oversee the department’s hemp program.

What is Florida’s Legal Definition of “Industrial Hemp”?

Cannabis has been cultivated for more than 10,000 years as a fiber and grain crop. The term “industrial hemp” means cannabis used primarily for fiber and building materials.

…the plant Cannabis sativa L. and any part of that plant, including the seeds thereof and all derivatives, extracts, cannabinoids, isomers, acids, salts, and salts of isomers, whether growing or not, with a delta-9 tetrahydrocannabinol concentration of not more than 0.3 percent on a dry weight basis.

Cannabis or marijuana is classified as a Schedule I controlled substance as provided in Section 893.03(1)(c)(7), F.S. Under Florida law, “cannabis” is defined to mean:

all parts of any plant of the genus Cannabis, whether growing or not; the seeds thereof; the resin extracted from any part of the plant; and every compound, manufacture, salt, derivative, mixture, or preparation of the plant or its seeds or resin.

Under Florida law, it is still a third-degree felony for cannabis to be:

The possession of a small amount of cannabis is a first-degree misdemeanor, although in some jurisdictions the officer has the discretion to issue a civil citation instead. But now hemp is not included within the definition of cannabis.

What is Florida’s Legal Definition of Medical Marijuana?

Not only is hemp not included within Florida’s definition of cannabis, but neither is medical marijuana. In other words, the term cannabis does not include “marijuana,” as defined in s. 381.986, if the marijuana is manufactured, possessed, sold, purchased, delivered, distributed, or dispensed, in conformance with s. 381.986, F.S., [the Compassionate Medical Cannabis Act of 2014].

The term “cannabidiol” or “CBD” refers to a particular chemical compound found in cannabis. The psychoactivity of CBD is different than THC.

Another problem is that CBD contains some small percentage of THC which is impossible to remove entirely. Depending on the source, the percentage will vary between approximately 3-10%. For this reason, if a person uses CBD then their lab report will often show some carboxy-THC metabolite which depends on how much the person has used, timing issues, and the CBD preparation itself.

What is Tetrahydrocannabinol (THC)?

THC, or tetrahydrocannabinol, is the main active ingredient in cannabis. THC is the main psychoactive constituent of cannabis. 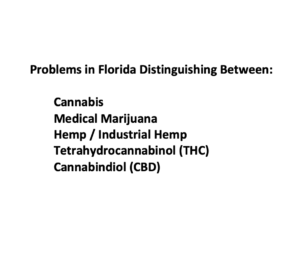